Sushi is not only a delicious meal, it’s a culinary experience. Each iteration of sushi combines traditional means with modern methods. Though Charlotte, North Carolina may not be well known for our Japanese food, Charlotte sushi pays homage to traditional Japanese cuisine while also adding our own twist to make our dishes and rolls uniquely our own. Here at Nikko Japanese Restaurant, we’ve perfected the art of Charlotte sushi and are proud to serve it in a comfortable yet fun environment. If you’re looking for the best sushi in Charlotte, then you’ve found it at Nikko. Keep reading to learn more about sushi, how sushi is made, and what makes our sushi and Japanese restaurant stand out from all of the others.

While many believe they know the roots of this traditional cuisine, sushi actually has a longer, more complex history than most people are aware of. Sushi was actually started in ancient China, with records indicating it began gaining influence around the second century. Though the anatomy of early sushi is similar to modern forms of the food, there are big differences that set the two dishes apart. Early sushi was used as a means to preserve food by combining salted fish with cooked rice. When cooked, rice produces acid that, when mixed with salt, help slow bacteria from breaking down fish. However, early sushi enthusiasts would then discard the rice and eat only the fish.

This method of preserving and preparing fish eventually spread across Asia, finally settling into Japan around the seventh century. However, it wasn’t until the 17th century that people started eating rice with the fish. It was also around this time that sushi vendors started popping up and were selling modern-ish sushi as snacks and small meals. These early sushi vendors were some of the first iterations of fast-food restaurants as they were simple carts or stalls that served food on the streets. In the next few centuries, sushi would undergo major changes as different styles of sushi began to pop up. After World War II, sushi carts and stalls began moving indoors, giving way to the modern sushi restaurants we have today.

Sushi eventually became a worldwide sensation as sushi restaurants began opening up in countries all around the world. Each modern sushi restaurant combines traditional Japanese methods with unique flair and cultural ties depending on the location of the restaurant. That’s how pieces like the California Roll and Philadelphia Roll were first introduced. With restaurants and cooks constantly looking for new and exciting recipes, it’s nearly guaranteed that sushi will continue to evolve over the years, just like it has here at Nikko Restaurant. Our highly trained sushi chefs are constantly looking for delicious new twists on this storied Japanese dish. Come into Nikko and see how we’re making Charlotte sushi a staple not only in the community, but in the sushi world as well. Contact Nikko to make your reservations today.

While many people know the more popular versions of sushi, like the California Roll, some may not know that there are several different types or styles of sushi. Much like there are different styles of barbecue, sushi comes in many different forms and can be prepared in different ways with different ingredients. While some dishes or rolls are offered year-round, there are some that are only offered at certain times of the year or at the chef’s direction. So, depending on where and when you get your sushi, the experience can be completely different from one restaurant to the other. Below we’ll explore and explain a few of the most popular styles of sushi you can find both here at Nikko and around the world.

Makizushi: This style of sushi is the most commonly known form of the food. Made by wrapping ingredients in rice and nori, which is the thin piece of dried seaweed that the rice is often stuck to, makizushi allows chefs to prepare a wide variety of sushi in a compact roll. This style of sushi started in the 18th century when dried seaweed sheets were first invented. The modern version, known as uramaki or “inside out sushi”, sees the rice affixed to the outside of the seaweed and is believed to be invented in California in the 1960s.

Narezushi: This is the original sushi form brought to Japan in the seventh century. As we described above, this style of sushi uses fermented rice to both preserve and prepare the fish. Though the earliest versions of this dish saw people throw out the rice, as it was fermented for months or even years, modern advancements in fermentation science has allowed us to reduce the time it takes to make this dish, which gives us the opportunity to eat the rice. This style isn’t as popular anymore as it originally was and is usually only found in certain areas or regions.

Nigiri: This style of sushi was the one that moved sushi to what we know it to be today. Nigiri style sushi was the popular form of the cuisine the original sushi vendors made when sushi was first sold. One of the more simpler versions of sushi, nigiri is a cylindrical column of hand-pressed rice with toppings made from seafood, vegetables, or tofu. Some chefs even choose to garnish their nigiri with things like sauces, shaved onions, or green onions.

Temaki: One of the most modern forms of sushi, temaki is one of the more unique yet easily made versions of the food. Making a cone out of nori, temaki looks more like ice cream than it does sushi. Chefs take these nori cones and put rice and other ingredients inside to make a highly portable version of this traditional Japanese food. Some of the most popular fillings include squid, sweetened omelet, shiso leaf and pickled plum paste, and negitoro.

Other styles of sushi:

Whether you’re trying a brand new style of sushi, or indulging on your favorite, you’ll find a wide variety of sushi here at Nikko Japanese Restaurant. View our menu to see what you’ll love at our sushi restaurant, or contact Nikko Restaurant today to set up your reservation.

How Sushi Is Prepared 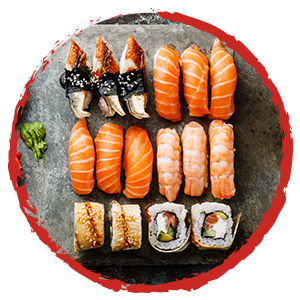 Like most fine foods, sushi gets its great tastes from the way it’s prepared. Chefs take great care in preparing and making every aspect of the dish. Many sushi chefs train for years before they can even be considered a professional sushi chef. A lot goes into the preparation of sushi, and the more flavorful the sushi is, the better the chef who prepared it was. There are even some forms of sushi that require chefs to have extensive knowledge of the dish, or they aren’t allowed to make it. Here, we’ll go over some of the most popular ways sushi is prepared, from traditional to new age techniques.

While certain forms of sushi will require chefs to use different methods to prepare their sushi, these are the basic methods used to create sushi. Here at Nikko Japanese Restaurant, our expert sushi chefs are highly trained and know exactly what to do to create delicious sushi. You can even watch our chefs create their rolls and dishes at our sushi bar. If you’re looking for the best sushi in Charlotte, then Nikko Japanese Restaurant is the place for you. View our sushi menu, or contact Nikko to set up your reservation today. 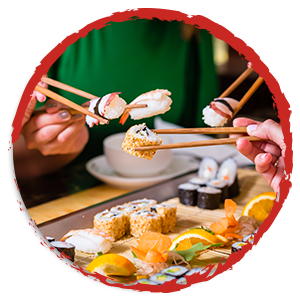 Nikko Japanese Restaurant is one of the best restaurants in Charlotte. We do this by offering traditional Japanese cuisine alongside modern twists. All of our food is fresh and is sure to be completely delicious or we’ll do everything we can to make it better. Our seafood is picked by our experts for quality and is prepared by our highly trained sushi chefs. We have many different options when it comes to sushi, including nigiri, sashimi, maki, and temaki. Whether you’re looking for a popular roll like the California Roll, or you want to try our famous Charlotte sushi, like our Charlotte Roll or House Cucumber Roll, you’re sure to find a dish you absolutely love here at Nikko.

On top of our world-class menu, Nikko has daily specials that are sure to keep bringing you in night after night. We have drink and food specials that are sure to tickle everyone’s fancy. Our full bar brings you drinks from down the street and around the world. Whether you’re looking to cool off with a cold domestic beer or you want to warm up with some hot sake, Nikko Restaurant has the perfect drink for you. On the weekends, Nikko has live music performed by local and upcoming artists. Chances are you’ll even get to meet our owner Joanna as she dances with her signature boa and cowboy hat.

No matter if you’re a sushi expert or a nigiri greenhorn, you’ll find something you love here at Nikko Japanese Restaurant, home of true Charlotte sushi. Come in during the day to get the best lunch in Charlotte, or enjoy your world-class dinner in a beautiful, one of a kind atmosphere. View our daily specials to find the best one for you, read our menu to see what you’ll love at our Charlotte sushi restaurant, or contact Nikko Restaurant today to answer any questions and to book your reservation.